When you get to Zomberry Island, run left and talk to the police officer on the left side of the bus. Then, the police chief appears and says Dr. Romero has been trying to find a cure for the Zombies and

When you get in the tunnel, it’s really dark, so equip your flashlight. You can turn it off or on by pushing the space bar. The flashlight will help you see better, but it won’t scare the zombies, so you need more light to scare them away. You still keep moving anyway. Now, run left while not touching the zombies. This will make you scream and it will make you run away from the zombies. When you see the oil truck, pick up the car keys.

Keep running while not touching the zombies until you reach a “Dorf Bean” car. Use the car keys from your items and it just so happens, that they fit. Click on the door to enter the car. When you get in the car, click the “lights” button to the bottom left of the screen. Once the lights are on, click the lever at the bottom of the truck. It will make the light point towards the zombies, and you then can go in the “Financial District.”

When you go in the “Financial District,” go to the construction site, and jump on the beams until you reach a machine on the top beam. Use the machine to carry the bottom right beam that the tool box is on to the opening on the top. To get to the toolbox, jump off the machine to go over the cement blocks.

Now, you will be going through trash. When you move everything to the sides, click on the Subway Passport. Jump off the beam and go down the Subway to the left of the construction site.

When you go in the Subway tunnel, try to avoid the zombies that are there. I jumped over them. Run left until you see a scanner, you can then use your Subway pass on it. The subway pass will be in your inventory. It will open the door, so you can now enter the Subway. Run left until you reach the Chinatown Subway. When you reach the other scanner, use your Subway passport… again. This scanner will finally let you enter the actual subway. When enter the Subway, there will be a light bulb above you. You will need this for later, so click it to put it in your bag. Exit the subway by running right to go back outside.

Run left to the Smoothie Shop, and go inside. When you enter, there will be pamphlets on the wall. Take the one in the middle. This pamphlet didn’t help me at all, but it had to be there for a reason… 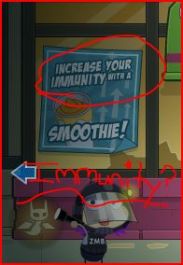 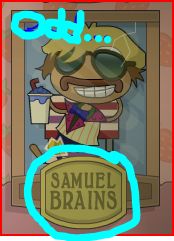 Run left to the “Shady Side” once you leave the smoothie shop.

When you get inside, here’s a list of all the rooms in the building you need to get to.

Room 7: Go to the computer, and click on the post-it note. It will be in your clue notebook.

Room 5: Get the bolt cutters from near the door. Go the fridge and click it. This clue will also go in your clue notebook.

Room 1: Click on the trash can. Again, move the things to the side until you get a can of Valley Rain, which is also a clue. Click the camera on top of the stereo. You can talk to the dude and you can also play the game he’s playing. The experience from the game will come in handy later. 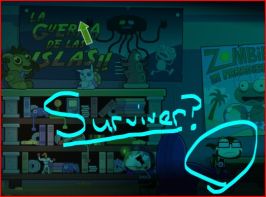 Run to China Town and go in the Karaoke building.

When you enter the Karaoke building, talk to the disco woman on stage while avoiding the zombies. She says she is trapped, and that you need to make the zombies leave. Go right until you see a zombie. Point your flashlight at the disco ball above the zombie. The zombie will then leave. Then, click any of the disco lights. The floor will light up and the zombies will leave. Go up on the stage and talk to the woman. She then leaves once you ask the last question. Click the paper on top of the stereo. You will then get yet, another clue. Click on the computer and go to the “Find My Phone” app. Then, put the user and password in. The user is DOCTOR and the password is AWESOME. It tracks the phone to a bunker. Click the unlock button.

When you enter Chinatown, run to the left until you get next to “Wok and Hard Place.” Jump onto the red roof and then jump onto the wire with the lanterns. Time to use the light bulb. Go to your inventory and click “Use.” The lanterns will then light up and scare the zombies away. Then, click the hole under you to go in. When you go in the hole, you need to point your arrow to the left to go on the train. Once on, go inside. When you enter, run all the way to the right and push the lever. It will arrive in the Financial District. Go back outside and climb up the ladder that’s above you.

After you climb the ladder, go to the right to the “Secret Bunker.” When you click to go inside, zombies will appear. You will then scream, and click it again to go inside.

When you get inside, run to the phone and call: 555-3946. The zombie to the right will drop the phone and a sheet of paper. It’s the doctor! Pick both of them up. The paper will go to your clue notebook. The phone will have a video diary you can look at. Go to the bulletin board. Go through all of your clues and put all the fruits the people ordered on the board.

Coffee just randomly pours into a randomly made cup. Nothing weird about that… Click the coffee. It will go in your bag.

Go outside through the door at the top left of the building. Go to the gate near the karaoke building, and use the bolt cutters. Then, go inside. When you get inside, run to the right to the box that says “Don’t open until 2000″ and go inside. It’s a little overdue to be opened. When you get inside, there’s a guy that is alive. Go talk to him. Say that you couldn’t climb up the crates because the zombies kept attacking you. He says that he will help you. Give him the coffee and he will give you a key-card. Climb up all the crates on the right side. When you get onto the top one, jump onto a ledge. Go down and jump across the platforms, so you can get to a machine. Then, use the key-card that’s in your inventory. Go down to the blueberry cargo and click it.

The crane will start moving on the screen. Try to avoid all of the columns that are 3 boxes tall or you will have to start over. Click the crate that says, “73 G” and a spotlight will point toward it. Enter the box.

There will be a blue zombie in there that keeps chasing you. Equip the camera from your bag and push it at the bottom left screen. It will stun him and you need to go to the blueberries. Click it and it will go in your inventory. You have to wait until the zombie leaves for you to leave. When you do leave, you have to go back to the lab. Run all the way to the left and enter the subway. When you enter, scan your Subway pass at he scanner to the right while avoiding the zombies. Run to the right to the train and jump on top of the front of it. Go back up the ladder, again.

Go to the machine and click “Use” on the blueberries. Turn the crank to make the antidote. Then, click on the antidote. It will be in your bag. Shoot the doctor with it to turn him back to normal. He says that we need to make more to cure the entire population. The zombies are trying to come in! Board up the doorway by clicking the wood next to the door. You then say it will hold up… For a while. The doctor then says that the antidote is ready to be made. You then have to go back down and turn the crank as fast as you can unless you want to be annoyed by the doctor. The zombies are breaking in when you are turning the crank. The zombies are just for show. They won’t come out until you finish. They won’t even come out if you’re going as slow as you can. After you make the antidote, the doctor gets afraid and runs back to the cage. You then have to fight ALL of the zombies ALONE.

This is where the experience from the dude’s game comes in handy. To make it easier, hold your mouse down instead of clicking. After you cure all of the zombies, Joe Puddy, Gamer Dude, and Samuel Brains comes in from an imaginary door. They say, “Thanks!” and you get the Zomberry Island Medallion! Congratulations!

WARNING: BONUS QUESTS ARE FOR MEMBERS ONLY

3 days later in the “Secret Bunk:” Dr. Romero, the guy that lives in the crate that says not to open it until 2000, and you are still inside. Dr. Romero says that his next mystery is… How did the guy live for over 13 years in a crate with no water? Giant rats come onto the screen and take the guy away. Then, Dr. Romero says that with rats infected, it could be 10x worse! He then gives you an extra strong antidote. He says to go outside and find an entrance to the sewers. He also says to put the antidote into all 3 pumps that are giving the city’s water supply. Go outside through the door on the top left screen. The sewer is right outside. Enter the hole.

When you enter the sewer, run right while avoiding the rat. Push the crate out-of-the-way. Use the antidote on each pump and click the wheel when the zombie comes to attack you. You have now completed the bonus quest!